Synopsis in a Sentence: Teeg Lawless finds love in all the wrong places.

Right off the bat I gotta say Criminal is a tough book to discuss. Not in a bad way, mind you. I’ve loved this iteration by Brubaker and Phillips, and if you’re fans of their past work, so will you. What makes it tough to discuss is there aren’t really arcs in the traditional sense of the word, as far as modern comics go. We go from one set of characters and story, to a completely different set and story, then introduce some new set and story, and now we kind of loop back. Like I said, tough to discuss, but by no means is that a strike against the work. So I’ll just get into this issue, titled “Song to the Siren.”

We open up with good ol’ Teeg Lawless, lovesick as a puppy. And who is this new broad he’s shacking up with, spending his money “like it had an expiration date”? She sure looks familiar, huh? We’ll get back to that later. 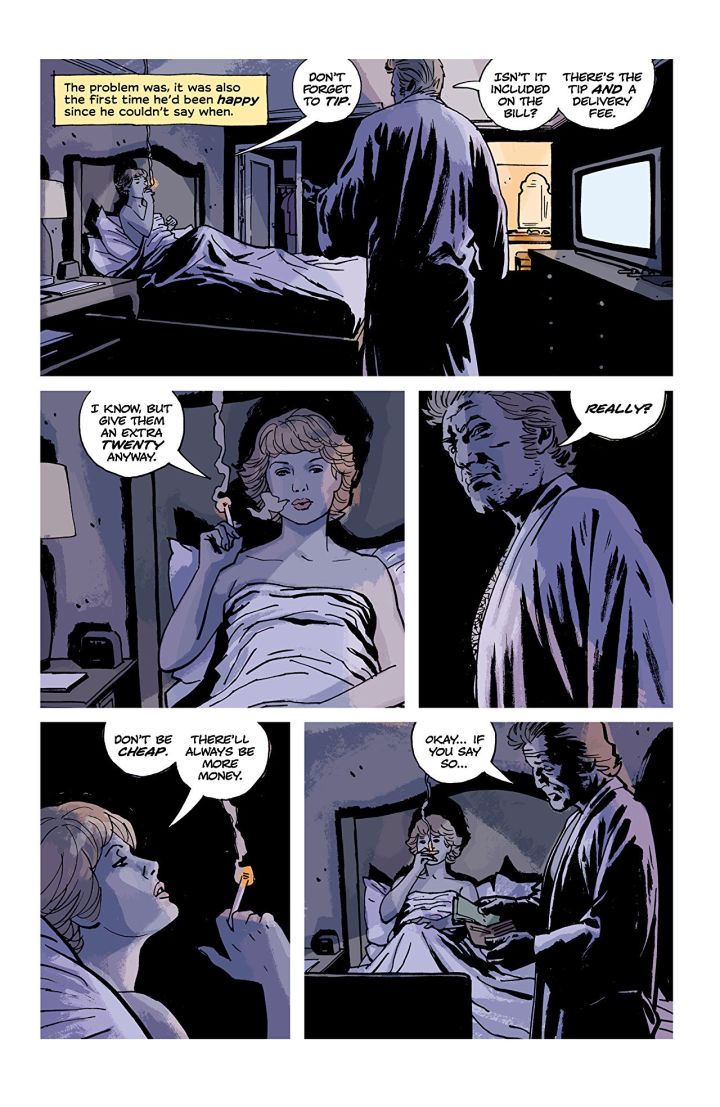 We get a flashback showing how Teeg got to this point, namely by scoring large on a stick-up job with fellow criminal Chic Severin. The two go out to celebrate at a club and run into Jane, one of Chic’s old girlfriends. Teeg is immediately smitten, but by the end of the night Jane goes home with Chic.

The next morning, Chic recruits Teeg to go “teach someone a lesson.” Seems Janey stole 10 grand from him, and Chic wants his pound of flesh. They go to a cabin on a lake Jane is staying at, but she gets the drop on Chic and shoots him dead. Teeg has her dead to rights, but doesn’t pull the trigger. Instead the two of them start a whirlwind love affair, living the high life on what’s left of the robbery take.

The money finally runs out as Teeg is informed his “wife’s” credit card was declined at the hotel they’re staying in. He hastily packs up and sneaks to the bar where Jane went for a drink, hoping to skedaddle before hotel security catches them. Teeg sees Jane talking to a guy at the bar, and it’s here that it clicked for me- Jane was indeed the woman from the previous issue that was being traced by the PI- the guy she’s talking to here. Yeah, I’m a bit slow on the uptake.

We already know how THAT ended; this issue ends with Teeg trying to put together a big score to appease Jane’s insatiable desire to live on a permanent vacation. Oh, and he gets word his son was evicted because Teeg forgot to pay rent. What a scumbag.

Overall this was another near-flawless issue of Criminal. Brubaker writes crime noir like no one else, and Phillips’ art, while perhaps not for everyone, definitely fits the tone of the book. I love how this tied into last issue, and look forward to how this piece of the Criminal puzzle fits into future books.