Synopsis in a Sentence: The paper girls get a restart to their first day together with no memories of their adventures, but the promise of friendship to come regardless.

We’ve finally hit the end of the bittersweet road with Erin, Mac, Tiffany, and KJ. I’ve been reading this book since issue 1, and it’s the only ongoing series I’ve seen through to the finale since I started reading comics 5 or so years ago. Has it been a perfect series? No, I can’t say that. There were times when I was downright frustrated with how Brian Vaughan kept us in the dark. But I’m damn glad I stuck with this book, and there were definitely more good times than bad. On to the recap…

We begin with Mac feeling out of place at KJ’s bat mitzvah before Erin enters, whose name neither of the former can remember. Erin begins to remind them that they can’t forget that they were friends, something the quartet tried desperately to remember when they were mind-wiped and returned from the future last issue. Before we can get too worried that their memories are gone, Terminator Tiffany busts in and blasts the other 3 with rainbow-emitting guns, and whew- it was all a dream of Mac’s. 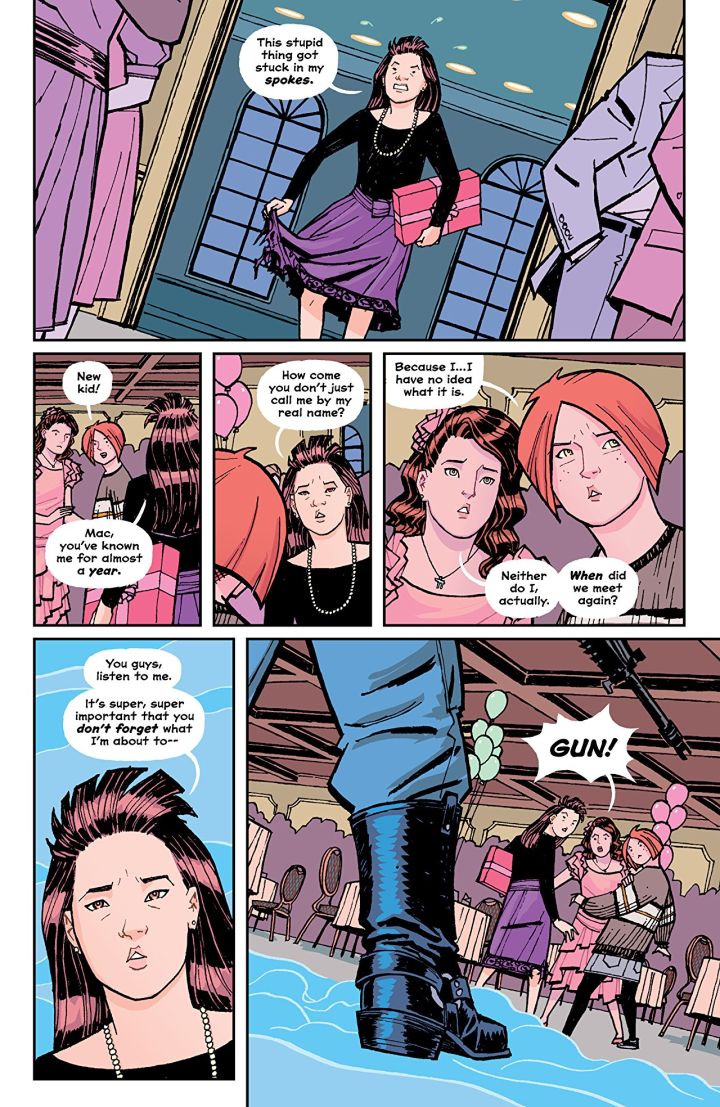 Mac gets out of bed only to realize (with some help from her asshole brother) that it’s 5am on Hell Morning (early after Halloween night), exactly where the series started. She gets dressed and heads out to deliver her papers. We’re then treated to a beautiful two-page spread of Mac riding in the early morning, and I have to say here what a treat it’s been to view Cliff Chiang’s art over the series; Matt Wilson’s colors have been unbelievable as well- something I only seem to notice when it’s really good.

The next few pages show each of the girls waking up, not remembering all they’ve been through, but Vaughn does a nice job of teasing that those memories are just out of reach. The girls eventually meet up, like they did the first time, and deal with some bullies, almost like they did the first time. There are some subtle differences sneaking through; enough to even notice from the first issue nearly 4 years later. And yet it still manages to feel familiar- once again, great writing at work.

The paper girls decide once again to stick together on their routes in case any more ruffians show up, when out of nowhere a station wagon is on their asses, then swerves in front of them, causing Erin to skid and fall off her bike, spilling papers everywhere. This is new, and we see why- the driver is none other than Wari in disguise, the woman they met in prehistoric times and the future. She just saved our heroines from getting hit by a drunk driver speeding through an intersection. Wari drives away, leaving the girls to ponder who saved them.

Did I mention this was an oversized issue? Hence the oversized recap, but I’ll try to cut the rest short. The girls hang out and smoke at a playground, Tiffany has a weird existential moment about finding herself by quitting her job (or something- the only “off” part of the book), the girls finish Tiff’s route with her, and they all go their separate ways.

Wait! Erin asks her “new” friends if they want to hang out together before getting ready for school. Just ride around. They all agree, and we’re left with the satisfaction that the unspoken bond forged over their incredible adventures hasn’t been broken. Now that’s more like it.

Paper Girls #30 gave me everything I wanted in a series-ending issue. It had callbacks, feels, and a sense of closure for the book that leaves readers happy, even though it’s sad to see it go. In short, it “delivered.”