Grab your 3-D glasses and get ready to dodge some baddies before you go blind– it’s The 3-D Battles of WorldRunner!

3-D WorldRunner consists of running in a “3-D” world. The end. 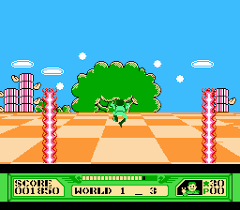 OK, so there’s more to it than that. You also hop. The end.

Well, there are also monsters you avoid, and at the end of a level (or maybe after a certain amount of stars are collected?), you can shoot at a boss or two.

If you run into columns along your jaunt, you may get a crappy power-up that gives you extremely short invinciblity or allows you to take an extra hit. You can also get a 1up, but don’t eat the mushrooms– instant death. Oh, and no continuing from worlds you reach, which got old fast.

The 3-D is accessed by pressing “Select”. I actually dug out some 3-D glasses and gave it a whirl, but it gave me more of a headache than a sense of 3-D.

The shining star of 3-D WorldRunner is by far the music. The score had me humming along as I played, and is easily the best thing I’ve heard in the few games I’ve reviewed so far.

Overall, The 3-D Battles of WorldRunner is more gimmick than game, and the gimmick doesn’t even work well. The graphics are lame, the power-ups aren’t powerful, and starting over all the way at the beginning after dying made the game more frustrating than fun. But man, that music is great.

Check out my playthrough on twitch!

One thought on “The 3-D Battles of WorldRunner”