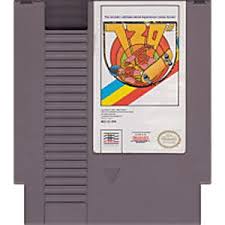 It’s time to grab some gnarly air and Barley grind our way to skateboarding immortality, dudes! Ok, I have no idea what I just said, but I DID play 720°. Time to shred this review! 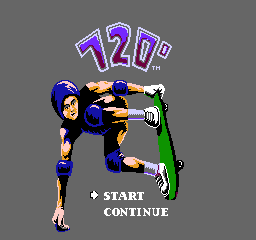 720° is one player, and starting the game throws you into the heart of the action, in the middle of an urban area filled with streets, ramps, and obstacles to avoid like cars and weird citizens. There are circular “Map” icons you can skate into to get your bearings and that display the four main shops and events you can interact with.

While skating around the city, you can do some tricks to earn points by pressing ‘A’ to jump, then ‘B’ and different directions. I’ve seen it mentioned that you don’t need to use ‘B’, but I personally couldn’t get it to work otherwise. Make sure to press the direction you were initially heading though or you will wipe out. The points you accumulate are automatically cashed in for tickets you need to partake in the events.

The events are the very similar “Jump” and “Downhill”, “Slalom”, and nigh impossible “Ramp”. Do well in these and receive one of three medals (Bronze, Silver, Gold), more points, and some sweet, sweet caish to spend on upgrades. Putz around too long in the city looking for points and a “SKATE OR DIE” warning pops up, followed by a swarm of presumably killer bees that will hunt you down unless you can slip into an event.

Graphically there’s nothing to write home about, but the music is pretty good. The controls take some getting used to, and I never did figure out how to consistently do well on the Ramp event. Overall, 720° was an okay diversion for a half hour or so, but not something I plan on revisiting.

Check out my playthrough on twitch!