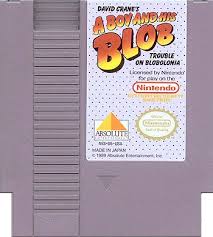 Get ready for puzzling platformer A Boy and His Blob: Trouble on Blobolonia! Damn, that’s a mouthful.

The title screen to the one-player game seems pretty familiar, but I can’t quite put my fedora on it…

The game kicks off with you (the boy) on a deserted street with your amorphous pal (the blob). You’ve got a supply of jelly beans which you can feel the blob to get him to transform into useful shapes. For example, licorice turns the blob into a ladder you can use to reach higher levels, and punch get the blob to become a hole to fall through to reach lower levels. There’s usually a cute tie-in like alliteration to help you remember which beans do what, but it would have been nice to just have a permanent reminder after you use them once. The number of beans are limited (some as low as 5), and I didn’t see any way of adding to the stock. 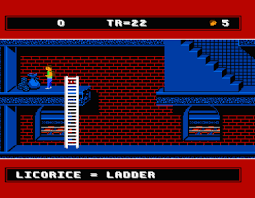 The goal of the game seems to be collecting treasures, and there is an ever-present counter starting at 22 that ticks down whenever you snag a bag of loot. There’s also progressing through the levels, and the game takes a frustrating trial-and-error approach to exploration. Starting out with 5 lives is nice, but having to guess where to place the blob hole to not fall to your death over and over again, for example, gets old. Maybe today’s games have just spoiled me with hand-holding and save points? 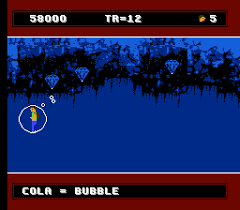 Besides natural causes (plummeting, drowning, rockslides, etc.) killing ya boy, there are also creatures to watch out for. Well, I only came across a weird centipede-like baddie, but maybe there are more. One touch from it is enough to knock a life off. 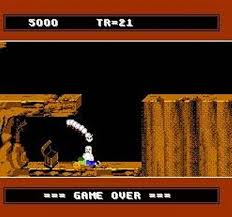 Graphically, A Boy and His Blob ain’t great. The blob is pretty cute, and the transformations are ok, but everything else is pretty generic. The music is catchy but overly repetitive. The controls are pretty bad, with the boy sliding around like he’s on ice, and positioning the blob just right is a chore.

Overall, A Boy and His Blob: Trouble on Blobolonia left me pretty disappointed. I always wanted this game as a kid, but now I wonder if 12-year-old me would have stuck with it or just been as frustrated as 42-year-old me. The concept is original as hell, but the execution falls a bit short.

Catch my gameplay for this & more on twitch; live M-W-F 3pm EST!