Everyone’s favorite child-murdering burn victim hits the NES for some family fun! One, two, Freddy’s coming for you….

After a decent title screen, the game asks you to choose the number of players.

Wh-wh-what?! Up to FOUR can play? At the SAME time?? What kind of sorcery is this??? Oh wait, there was that 4-player gadget for the NES that let you play with four (maybe five?). Seems like an odd game to implement it, but the more the merrier. Thanks game, I didn’t already have enough issues looking for a second player…

The game kicks off with teenage you outside a house on Elm Street. You can jump over or punch the baddies which consist of everyday (albeit large) critters and weird dudes. But here’s the rub: if your sleep meter runs out, whether by taking too long to progress or taking hits, things go all wavy Wayne’s World dream sequence, and you are in a nightmare version of the real world.

In nightmare world, the baddies are more monstrous, some taking on Freddy visages. And now when you run out of time, the familiar sing-song notes of “One, two, Freddy’s coming for you…” start playing, and if you take too long before finishing a level, you have to face off against a leaping Krueger.

Speaking of the levels, they consist of buildings along Elm Street, most of which are closed off to you at the start. Upon entering one, you are tasked with retrieving bones before you can advance to fight a version of the Springwood Slasher. Along the way there are power-ups to wake you up if you’re on Freddy’s turf, or turn you into a Dream Warrior with special abilities if you are asleep. Completing a level gives you a key to unlock a new area on Elm Street. 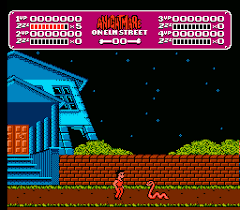 Aside from the title screen, the graphics are pretty standard fare– almost reminiscent of say, Double Dragon. Some of the Freddy monsters are pretty cool. The music is generic, but the NOES nursery rhyme tune does strike a chord. The controls aren’t great, and punching seems to be a bit laggy. You can’t just tap the button for fast hits; you really have to time your blows.

A Nightmare on Elm Street has a lot going for it on the surface. The real world vs dream world mechanic is interesting. Changing into a Dream Warrior with special abilities is a neat idea. And love him or hate him, Freddy Krueger is a horror icon, so a video game featuring the fedora’ed fiend seems like a no-brainer. But in this case, the overall experience just isn’t that fun, and the sum of the parts is definitely greater than the whole. Maybe if I could have rounded up three more Dream Warriors….

Catch my gameplay for this & more on twitch; live M-W-F 3pm EST!